We’re pretty excited about Charlie Blackwell-Thompson. A spaceflight engineer and veteran of the Space Shuttle era, she’s the first female launch director at Kennedy Space Center and the first woman to oversee a NASA liftoff and launch team — specifically, for the Artemis program. Artemis’ mission is to land the first woman and the next man on the moon by 2024 and to establish sustainable, ongoing exploration by 2028. Once that’s accomplished, NASA will take the next giant leap by sending astronauts to Mars. Artemis, named for Apollo’s twin sister, includes the Space Launch System (SLS) rocket — the most powerful ever built — and the Orion spacecraft.

Like Mathnasium, Blackwell-Thompson cares deeply about helping children see a path to future STEM careers, which include science, technology, engineering and math. We were eager to speak with her about her own career journey and to learn how she inspires kids to seek out jobs in STEM. Whether she’s counting down to launch or speaking to children in her hometown, it’s about exploring infinite possibilities.

Blackwell-Thompson: Artemis embodies exploration in bringing new capability to our nation’s space program. The moon is a treasure chest for science. When we return to the moon, it will be to a location that humans have never visited before, so there is huge opportunity for discovery, forever changing our understanding about the moon, our solar system, and our home planet. We also believe there is significant ice in the lunar south pole region that can be used for a number of things, including propulsion. 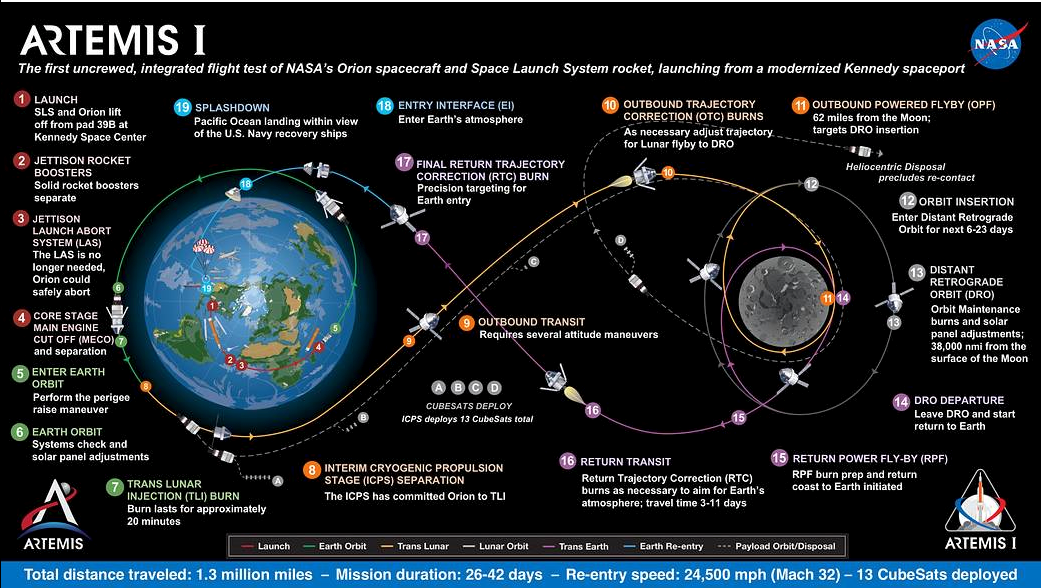 Illustration of the Artemis I flight plan. Artemis I will launch the SLS rocket and an uncrewed Orion spacecraft around the moon to test both systems.
Credit: NASA

M: Were you always interested in a STEM career?

B-T: When I was a young girl, I really had a strong skill set in math. Numbers tell a story, and when you can put math and logic together, it leads you down a certain path. It was one of my favorite subjects in grade school, and that carried over into high school.

M: You speak to students about STEM careers in your hometown. What do you discuss?

B-T: I enjoy going back to my hometown and sharing my career path with the youth there. That’s not to say that their path would be the same, but I think it’s important to let students know all the things that are available to them. Because whatever you choose to do in life, you want to know that there’s a path to it.

And when they then ask me, “Well, what do engineers do?” I share with them the kinds of things you do with an engineering degree, such as systems design, development, testing, operations, production and assembly. Engineering takes on so many different varieties of work. It’s essential, not just for the space industry, but for any industry. There are so many open fields.

M: You’ve always been a strong proponent of women in STEM, and particularly engineering. How have things changed?

B-T: Fifty years ago, during the launch of Apollo 11, you had about 400 engineers that were in the firing room for launch. And there was one woman who was there, monitoring her system and performing a technical function. Today, if we compare Artemis to Apollo, we have a woman (myself), leading the launch team. The makeup of our team is very reflective of our world, so you see a lot of diversity across our team, both in background and gender.

M: What advice do you give them?

B-T: I think I have the greatest job in the entire world. But if I trace that back to the people who enabled me to get to where I am today, it all starts with a foundation in STEM. So, I tell them to study in the STEM field. Work hard and do your best. It opens up not just the space industry path, but so many paths. And STEM, from NASA’s standpoint, starts with the foundation of math. 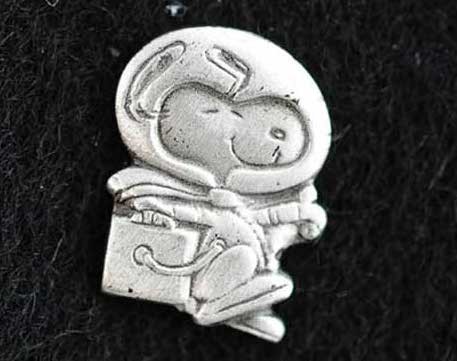 The Silver Snoopy award, given by an astronaut to an individual who made positive impact on mission success. Blackwell-Thompson received the award from Jim Newman, one of the astronauts on the Hubble telescope servicing missions. “That one meant a whole lot to me,” said Blackwell-Thompson, “because he was familiar with my work.”
Photo credit: NASA

B-T: I tell them that there are aspects of engineering that are hard, but it doesn’t mean that you can’t be a great engineer. It just means that you’ve got to work on those things that you’re not great at. There are going to be things that don’t necessarily come naturally to you, but you just keep working at them. And I would say that for math, too.

M: How do you use math in your work?

B-T: Our job on launch day is to monitor the vehicle and the ground systems to make sure that they’re performing the way that they should, so that we can either be “go” or “no go” for launch. That’s all based on engineering, and engineering is all based on math. Every piece of data that we’re looking at in the firing room, there is math behind it. Computers calculate some of that math, but the engineers have to understand the math and physics behind these calculations in order to make sure the data is correct.

M: What is your favorite part of your job?

B-T: Oh, this is an easy question. It’s the team aspect. I’m going to use math with a little bit of creativity here: Being a part of a launch team is “bigger than the sum” of the individual efforts.

I liken it to an orchestra. Each person has a beautiful instrument, and that instrument makes beautiful music by itself. But when combined with all of the other musical sounds of an orchestra, it’s something incredibly special. Helping my team move through the challenges that arise, whether it’s solving a technical or scheduling problem, and working in that team environment, it’s an amazing feeling. You’re part of something bigger. I love it.

M: What is it like to launch a rocket into space?

B-T: Launch day’s a special day. It is a fantastic experience. It is a day that you prepared for, you practiced for, and you’ve run through scenarios and simulations. And sometimes folks find this hard to believe, but as you get into the final minutes and seconds of launch countdown, it’s a very quiet environment. The team is really focused on their systems and on ensuring that they’re ready to go fly. The word that I would use, overall, is “thrilling.” 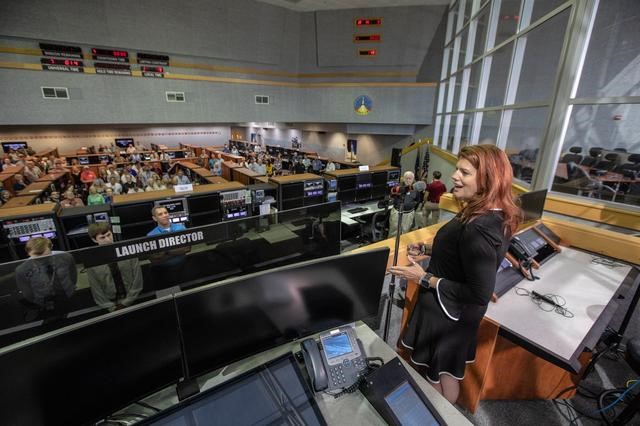 You know, I’ve been in this line of work for 30 years, and launch day never gets old. It’s the greatest day, because our mission here at Kennedy, and our team’s mission, is to get these vehicles off the ground and on the way to their mission objective. It’s not just about launching; it’s about launching safely. If the right thing to do is to sit on the ground because we have a problem, then that’s what we’re going to go do. So, there’s something amazingly satisfying about seeing that launch, and then seeing that vehicle go through its mission phases and accomplish its objectives.

M: Do you have a favorite space-related movie?

B-T: I love that our work is captured in movies. It’s hard to pick my favorites, but I am a fan of “Hidden Figures,” as it showcased the significant contributions of three African American women who played a key role in helping our nation learn to fly in space. These women are heroes to so many of us; they blazed a trail for women to follow for years and generations to come.

M: Which movie, if any, is truer to the reality of NASA or the launch experience?

B-T: “Apollo 13” was very close to the launch experience and is another one of my favorites. It is especially accurate in how the NASA team worked together to ensure the crew made it home safely. I think one of our greatest NASA attributes is how our team comes together to figure out the most challenging problems.

The first SLS launch won’t be until late 2020 or early 2021. Until then, Blackwell-Thompson will oversee testing to help avoid any surprises on launch day. The NASA.gov website features hundreds of inspiring stories, photos and videos about Artemis and NASA’s other programs. We hope you check them out and share them with your children and others. What Blackwell-Thompson and NASA will accomplish in the next few years is the next “giant leap for mankind.”

“We Are Going.” Narrated by William Shatner, this NASA video explains how humanity will go to the moon — to stay — and then move on to explore Mars and deep space.
Credit: NASA