Might better treatments be available for people with ADHD, depression, Alzheimer’s Disease, or schizophrenia if we could turn on—or off—the right genes in the brain?

This is just one of the questions behavioral neuroscientist Dani Smith, Ph.D., strives to answer—both as a lab researcher and an undergraduate lecturer at Johns Hopkins University in Baltimore, Maryland. Behavioral neuroscientists, like Smith, work to understand the underlying mechanisms that create behavior.

Of course, what’s considered “normal” has changed over the years. Not that long ago, society believed that schizophrenics were possessed by evil spirits; scientists now know that schizophrenia is a brain disorder.

Behavioral neuroscientists spend most of their time conducting experiments in the lab, using mice to learn how neurotransmitters or hormones in the brain affect behavior. Lab research, called “basic science” (a.k.a. “fundamental” or “pure” research), provides the foundation for “applied science”—practical application, such as the development of drugs for patients.

For example, today’s complex computers could only have come into existence after earlier research in “pure mathematics.” Smith’s basic research might be used or expanded upon by pharmaceutical companies, government, or other university research centers. 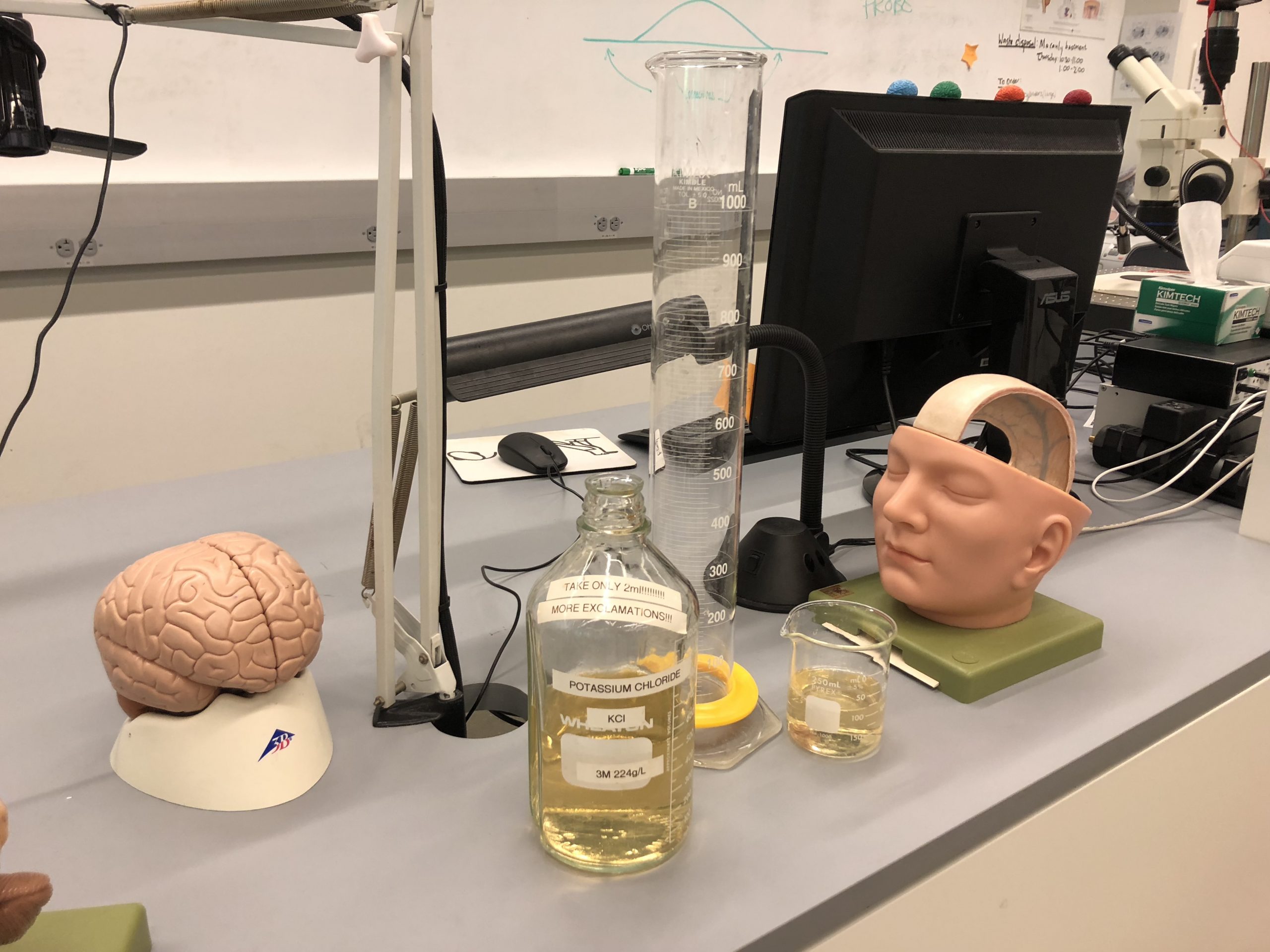 Models of the brain—including one that pulls apart like a puzzle—help to show Smith’s students where blood vessels and other structures are located. The beaker and bottle contain potassium chloride (K+), colored for visibility. It’s used to make artificial cerebral spinal fluid in which brains and other tissues are kept.

“Our behavior is the window to our brain,” she said. “The goal is always to apply what we find in the lab to humans, eventually.

Conducting basic research requires both problem-solving and computational skills, both of which come with mathematical thinking.

“Any time we design an experiment, we problem-solve,” Smith said. “If you find something that looks like it controls behavior, you can ask, down the line, whether that will work for humans. Another goal is to look for different therapies to correct the behavior.”

Once the initial problem and experiment are laid out, Smith must calculate exactly how much of a given chemical should be administered to the mice in order to test her theory.

It All Comes Down to Molecules

“If you have to inject the animals with a substance, you have to be able to weigh out the correct dose and mix it into a solution,” she said. “To do that, you must understand concentrations based on molecular weight: Look at the atoms that make up one molecule of that substance, then add up the atomic mass for each of the atoms. That’s your molecular weight.

So, to determine the right dosage to inject, Smith must:

The students’ beakers wait on a table in front of a picture window in the lab. Nice view!

This procedure is similar to how a doctor or pharmacist decides the dosage of a particular drug for a human based on his or her weight. Even the dosing instructions of standardized, over-the-counter drugs are based on an average expected weight of an adult and a child.

She also uses “analysis of variance,” a very narrow form of statistics, to work with computer modeling. She must understand the equations, know which variables to enter in the model, and then interpret the resulting data.

Even Ph.D.s Can Find Advanced Math Tough at First

Although Smith was a strong math student when she was young, like many students, she hit a wall in high school.

“I always liked math classes, especially geometry and trigonometry, and I did well in them—until I hit calculus as a high school senior,” she said. “That’s where I struggled, because the foundational things like algebra and geometry were not as strong as I had thought. I came out with a “C” in the class. I retook calculus in college and did great, though, because I had already seen all the materials.

“When I was done with calculus, I figured that that was all I needed, and I moved on to study different things. But when I majored in physiological psychology [which studies the relationship between the brain and behavior], I discovered that math is all around, in classes like chemistry, physics, and astronomy—which is all physics. So you still need a lot of those math principles.”

To read more “Cool Careers That Use Math,” see: