“If the world was the size of a basketball, my house would be as big as a flea’s flea!”

This is an example of how a seven year old once expressed proportional thinking to Mathnasium’s Co-Founder and Chief Education Officer, Larry Martinek. Of course, this seven year old didn’t know he was expressing proportional thinking at the time, he just knew it was fun to think about familiar objects changing size in relation to other familiar objects!

This demonstration of a “sense of scale,” placing a home in proportion to a basketball-sized world, was setup by verbal questions that involved proportional thinking.  Asking questions with your kids can help them develop strong mental math skills.  Let’s take a look at some more examples.

Imagine an amusement park filled with all sorts of rides, clowns, arcades, food—the works! Now along with that, place a carousel, ten times bigger than every other attraction, somewhere into this amusement park. It would completely stand out because it would be out of proportion.

Understanding these concepts involves a working knowledge of Proportional Thinking.

Some sample questions you can ask your kids are as follows:

If you put a dime in a machine and get 2 pieces of gum, how much would you have to put in to get 6 pieces?

If 3 tennis balls cost two dollars, how much will 12 balls cost?

A sense of scale can be activated by asking the following:

Number Sense does not happen by accident. It must be carefully instilled and nurtured by teachers and parents.  Parents, a couple of minutes spent on one or two questions a day will pay off in terms of long-term mathematical growth. Ask questions on the way to and from school, at the market, and in such unlikely places as an amusement park! 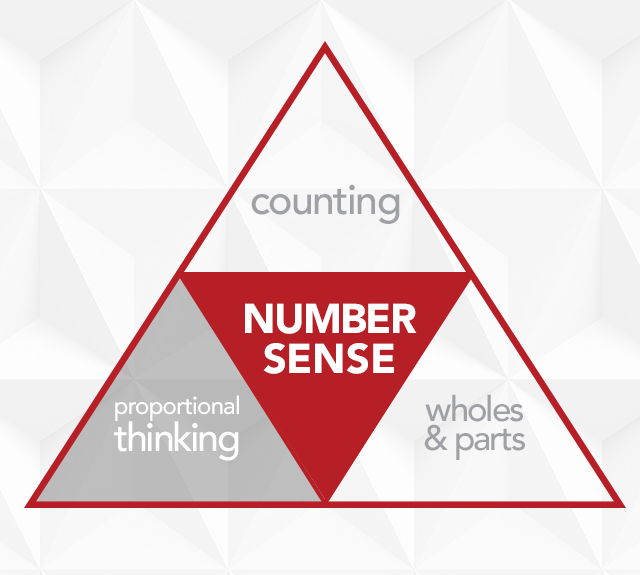 Be aware that “sense” is understanding things in context, as in the carousel example above. Context provides a framework of ideas and information that can be used in a meaningful way. Now that we understand the components of Number Sense: Counting, Wholes and Parts, and Proportional Thinking, let’s begin using our Number Sense!